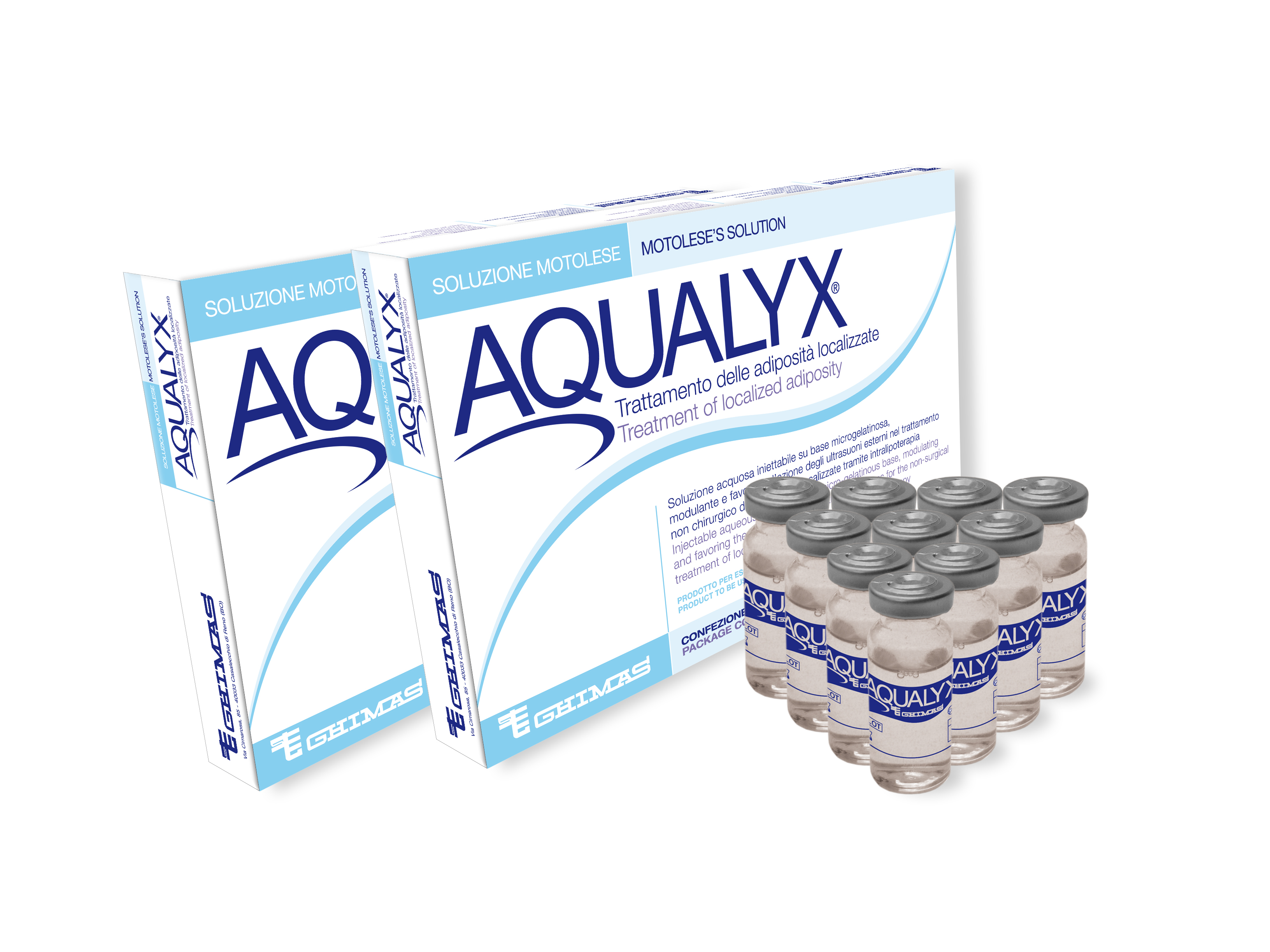 AQUALYX™ is an injectable fat dissolving solution that eliminates small pockets of fat from areas such as the legs, hips, arms, tummy & chin.

AQUALYX™ is an injectable solution, which is biocompatible and biodegradable.  It causes the dissolution of fat cells, after which the body then expels the released fatty acids naturally.

AQUALYX™ is a water-based solution that is injected into the fatty tissue, surrounds the cells and destroys them.  The remains of the fat cells are then excreted by the body safely as waste.  Within the following weeks the treated fat cells are gradually dissolved. The metabolism in the treated area is increased. Usually 2 injection spots are required per region with the amount of product used differing according to the area of fat being treated. The number of treatments required can vary dependent on the area/amount being treated with as little as 1 or 2 treatments required in some cases, going up to 8 in others.  Repeat treatments occur every 4 weeks.

What is it used for?

AQUALYX™ is intended for patients with localised fat tissue not responding to diet or increased physical exercise. AQUALYX™ is not intended for weight loss, it is used to improve and alter the contour of the body. Results cannot be compared to liposuction, as that is an operative method of fat reduction where large amounts of fat are permanently removed from the body. The results of AQUALYX™ are permanent, however the procedure takes time to reach its full effect.

What does the treatment involve?

During AQUALYX™ treatment, the skin is cleaned and then numbed with an anaesthetic cream before the solution is injected directly into the subcutaneous fat tissue using very thin, fine cannulas.  Local anaesthetic is added to the solution before injecting to make it more comfortable with the treatment being relatively painless. Patients report a warm sensation, itching, slight burning, slight swelling and reddening appearance for 1-3 days within the treated area.  Following treatment you may feel a little sore and swollen and we suggest you use light compression clothing for support and to aid the process.

The solution is mixed with local anaesthetic and most patients report no discomfort at all from the injections.  The solution itself can cause a mild tingling or burning sensation.

Are there any side effects?

You can expect some swelling, redness, bruising, occasional itching or burning sensation, for 3-5 days after treatment.  Sometimes there are small lumps and bumps under the skin, this is completely normal and may take a couple of weeks to resolve. These can be helped by wearing light compression garments (such as Spanx) during this time.

How soon will I see an improvement?

A course of usually between 2 and up to 8 treatments may be required before results are seen, however many patients report visible differences after just one or two treatments.

How long do the results last?

The results are permanent with patients still showing fat reduction in the treated areas up to 7 years after treatment. It is not, however, a weight loss treatment and does not replace a healthy diet and exercise.

Can anyone have this treatment?

No, you cannot have this treatment if you are pregnant or breastfeeding, diabetic, suffering from vascular disease, auto-immune disease, liver or kidney problems or have blood coagulation problems.

Get in touch today to book a consultation with one of our specialists.

Enter our competition to win a fabulous £50 off any treatment!

Yay! Just one more thing, please go and check your emails to confirm your email address and your name will be in the hat! Aly and Jade x